April 09, 2020
So we're in the middle of a pandemic. I guess I should be writing about it, but every time I try, it seems disingenuous somehow. Thousands have died, there are places in the world where hospitals are overrun and societies seem on the verge of at least partial collapse, and we're just starting to see the worst of it here in America. Things, are, as they say, not looking good. But here in my immediate circle, everything is, for the moment, okay.

I don't mean to diminish the gravity of the situation or imply that everyone's circumstances are the same, but, in many ways, things are better than okay, they're idyllic for us. As I draft this, I'm sitting in the shade watching my seven-year-old son run around in the sprinkler like it's any other spring day. We've spent a lot of time outdoors, walking on the local trail system, doing yard work, lazing in the Eno hammock. We're eating five-star home-cooked meals and having occasional takeout. We're watching the living shit out of Netflix and have more time to read. Sure it's sometimes difficult trying to manage a family during all of this, and we definitely have our moments of stir-craziness, but we're doing well, and I'm relatively certain my wife isn't planning on murdering me in my sleep even when I do my periodic crazy brooding thing and descend deep inside my own head or up my own ass or wherever it is I go.*

And there's the job situation. My wife is out of work for the foreseeable future, but we can get by on my salary in a pinch, especially when I'm not driving two hours back and forth to work every day and we're cooking at home a lot more. It may take a little scrimping, but we're incredibly fortunate at a time when a lot of families are facing major economic upheaval on a scale that we may not have seen since the Great Depression. There are people donning inadequate protective gear to care for COVID-19 patients in understaffed and over-extended hospitals, EMTs riding in the close confines of ambulances with patients, grocery clerks making $7/hour handling everybody's groceries and cash, construction workers and factory workers and others going to work as usual, often with poor sanitation. So someone please slap the shit out me from a safe distance if you hear me whining.

If anything, this whole thing is a study in how vast a place the world is, how interconnected we are and yet how separated. This virus, according to the latest evidence, made the leap to human beings in China in November. Within four months, it had made its way to Kershaw, South Carolina, which became an epicenter of the outbreak in the state. That's pretty impressive for a microscopic entity so fragile that soap and water kill it dead. It shows how intricate the webs tying us all together are. But we're also so separate that the images of military trucks hauling away bodies in Italy or the Navy hospital ships floating in the New York harbor seem remote, even as they inch closer and closer to home.

Anyway, this is rambling and disjointed, but that's okay. I'll leave the Gonzo journalism to those who are dealing with all of this on the front lines while I'm just sitting here watching the wheels go round and round, which is about all I can do.

*Somebody might want to screenshot this just in case, though. J/K

While we're here, since this is a blog primarily about writing and reading, here's what I've been reading: 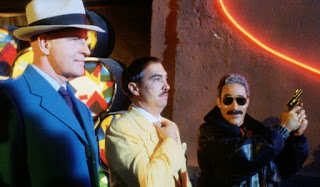