April 23, 2020
"It's like a plate of shrimp," explains a would-be philosopher in Alex Cox's 1984 movie Repo Man. "You think about a plate of shrimp and somebody says plate or shrimp, or plate of shrimp." It's an attempt to explain what he calls the "lattice of coincidence" that lies atop the world, available to us only in glimpses as we fleetingly tap into the cosmic unconsciousness. It's a notion that wouldn't be out of place in a Jorge Luis Borges story, so it's fitting that my introduction to Borges came, in a roundabout way, through the movie.  Included in a box set I bought mainly for Repo Man back when buying physical media was still a thing is another movie, Cox's 1996 BBC/Spanish TV production of Death and the Compass. Stylized somewhere between Dick Tracey and Blade Runner, it's a mess, but its cultish appeal and its philosophical heart are undeniable, and it ultimately led me to seek out the Borges story upon which it's based. People had been telling me to read Borges for years, including a few who spoke of him with a sort of hushed reverence. This supposed genius I'd never read seemed to be popping up everywhere, and randomly discovering Death and the Compass seemed like the universe whispering plate of shrimp into my ear. So I got my hands on Borges' Labyrinths, a collection of his stories, essays, and parables. 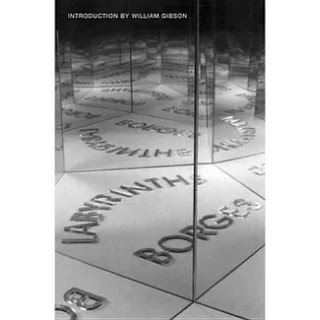 As with so many other things I fully expect to be transcendent, my first encounter with Borges left me a little underwhelmed. I found his ideas about cyclical time and the metaphysical patterns playing out in human lives fascinating, but the actual stories felt somewhat bloodless, lost in a sea of classical allusions and convoluted narrative experiments. I conceded it was probably brilliant, but it didn't really make much of an impression on me. I thumbed through that collection a few times over the years, thinking I should return to it, but it never seemed to be the right time.

Until now, a couple of decades later. Another long and winding lattice of coincidences that wouldn't make much sense uttered aloud (or explained in writing) recently led me to pull the book off the shelf again, and this time it opened up to me in ways it hadn't before. Some of the short works in the ficciones section of Labyrinths barely count as fiction, using the barest scraps of narrative as a frame on which to explore Borges' speculative philosophies. Taken individually, they sometimes don't amount to much, but reading them all together has a cumulative effect, the single stories becoming tiny facets in the lens through which Borges conducts his thought experiments and finds the underpinnings of the human experience in our shared mythologies. It's safe to say that this time around, it's finally hit the mark.

Up next, in no particular order: